Markers are the squares that ARToolKit recognises and tracks in a video stream. That is, markers are the physical patterns that you've created or printed out. ARToolKit comes with PDF files for some pre-made markers, e.g. the Hiro marker, which you can print out and affix to card or board (so that they stay flat). Markers are the optical inputs to ARToolKit. 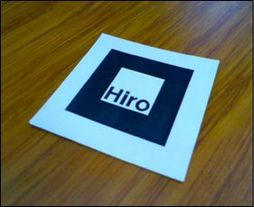 Markers have only a few constraints.

ARToolKit Professional v4.x has an additional feature (not found in ARToolKit v2.x), which is to use markers which contain a special two-dimensional grid of black and white squares (a little like a 2D-barcode) in place of the usual marker image. Use of these markers can speed up tracking when there are lots of markers in the scene.

What are pattern files?

Pattern files are files that contain data that represents the image in the center of a marker. When an ARToolKit program launches, it generally loads one or more pattern files so that it knows what markers to look for in the video stream. Pattern files allow ARToolKit to distinguish the markers you wish to track from other square objects in the scene, and to distinguish one marker from another.

You can find the pattern file for the Hiro marker in your ARToolKit distribution, in the file bin/Data/patt.hiro.

If you choose to use ARToolKit Professional v4.x's 2D-barcode markers, you won't need pattern files, just the identifying number of the barcode. 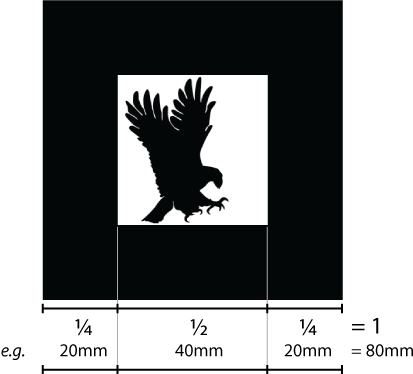 You can create a new marker by editing the template provided in your ARToolKit distribution, in the file doc/patterns/Blank pattern.png. You can create the marker any size you wish, and you can mix different marker sizes. When you use the marker in ARToolKit, you can tell ARToolKit how big the marker actually is through a configuration file.

The inner 50% of the marker is interpreted as the marker image by ARToolKit, as per the image at right. Note that the image can be colour, white on black or black on white, and it can extend into the border region. Remember that the part of the image outside the inner 50% will be ignored by ARToolKit though, and also be sure not to extend too far into the border, or else ARToolKit might not recognise the marker at all when its at a very oblique angle to the camera.

Even easier to use is Julian Looser's web-based marker generator. See http://www.roarmot.co.nz/ar/

If you are using 2D-barcode markers, you can find the marker images in your ARToolKit distribution, in the folder doc/patterns/Matrix code 3x3/

Creating the pattern files for your markers (or "training")

Once you have a new marker, you need to let ARToolKit know what it looks like by "training" ARToolKit to the marker's appearance. The output of the training is a pattern file.

You perform the training using the mk_patt utility found in ARToolKit, or you can use an online (Adobe Flash-based) training program. 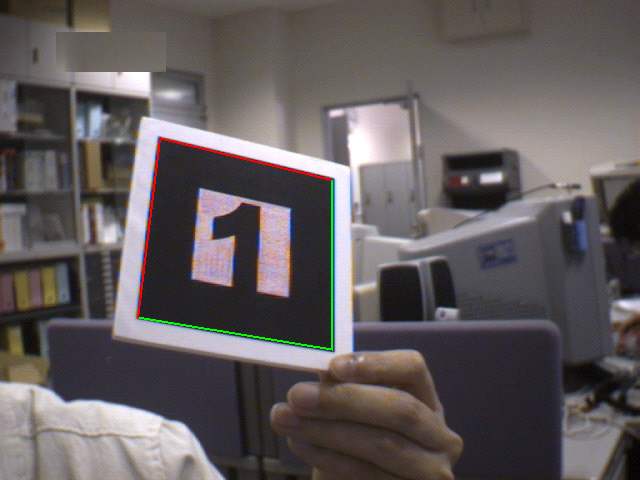 Point the camera directly at your marker. Try to align the camera so that the marker appears square on the screen, and as large as possible. If ARToolKit has identified the marker, it will outline it with a red/green square.

Rotate the marker so that the red corner of the square is at the top-left corner of your marker, then press the left mouse button. The image will be captured, and in your terminal window you will see the prompt:

Type a name for your pattern file (usually something ending in ".patt") and press return. If you don't want to save it, just press return to restart the video. That's it! You can train more patterns, or click the right mouse button to exit the program.

If you need to change the default mk_patt settings

The size of the marker border can be adjusted from the command line. Running the utility with the --help option will show the various command-line options for adjusting the default settings. e.g. (Mac OS X/Linux): or (Windows)

The help text is reproduced here:

You can change simpleLite or simple applications to use your new pattern by editing the source code and recompiling. First drop your pattern file into the bin/Data directory. Then, in your source code editor, locate the code and replace "patt.hiro" with the name of your pattern. Recompile, and voila!